CONTENTS
Front page
Eels Regulations 2009
The regulations
Are you affected?
How Pisces can help
Pisces expertise
Downloads
All about eels
Introduction
Ecology & conservation
Fishing
Pisces Conservation
About Pisces
Contact us
Web links
Pisces Consultancy site
Power Station Effects
Pisces software
Eels are perhaps our most mysterious fish, whose origin and life-cycle was unknown for many centuries. They have been feared, reviled as a destructive pest, hunted for food, and even worshipped.

Aristotle believed they were born from "earth worms", spontaneously emerging from mud. Country people claimed eels could be produced by steeping horsehair (that of a stallion, for preference) in water.

It was not until 1777 that the Italian Carlo Mondini proved that they are indeed fish. Until the late 19th century their larvae, leptocephali, were thought to be a different species.

Even into the 20th century, a second species, the broad-nosed eel, or grig, was thought to occur in European waters; the only distinguishing features being its broader head, blunter nose, and the length of the dorsal fin. Indeed, much about eels remains a mystery.

Classification
Worldwide, there are approximately 800 species of the order Anguilliformes, the eels, varying in size from 2 inches (5 centimetres) to 13 feet (4 metres). 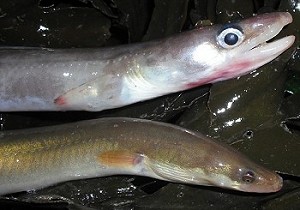 Conger (top) and yellow eel
In North Atlantic waters, two species, the European eel (Anguilla anguilla) and the American eel (A. rostrata) are present, as well as their cousins the conger and moray eels. Both Anguilla species are catadromous, spending most of their life in fresh water, and only migrating to sea to breed. Although they inhabit opposite sides of the Atlantic ocean, both species appear to migrate to the Sargasso Sea to spawn.

Life history
It was not until the last years of the 19th century that zoologists observed the transformation of eel larvae, or leptocephali, (previously thought to be a separate species), into juvenile eels. This led the Danish professor Johannes Schmidt to carry out many expeditions through the Mediterranean and Atlantic, observing the occurrence, distribution and size of leptocephali. Schmidt's research, over nearly 20 years, eventually led to the conclusion that spawning takes place in the Sargasso Sea, to the east of Bermuda. Despite this apparent breakthrough, spawning has never been observed, nor have adult fish that are ready to spawn.

After hatching, the eel leptocephali, transparent leaf-like creatures, begin their eastward journey across the Atlantic, carried by the Gulf Stream. Eventually, after 1 - 3 years, and at a length of 75 - 90mm, they reach the coasts of Europe, and transform into glass eels, still transparent, but much more recognisably eels. The arrival of glass eels usually begins around February, reaches a peak in April, and in some exceptional years may continue until June.


Glass eels & elvers ascending an eel pass; © Environment Agency, 2013.
The eels, often in huge numbers, begin to migrate up rivers. The migration takes place almost exclusively in twilight or darkness; daylight or bright moonlight appears to inhibit their movement. In the tidal sections of rivers and estuaries, they use a process called selective tidal stream transport (STST); they move up in the water column on the flood tide, and so are carried upstream by the current. On the falling tide, they rest on the bottom and maintain their position, perhaps burying themselves into the sediment. Thus they achieve a net upstream movement. As might be expected, there is evidence to suggest that their movements are greater on spring tides; their behaviour is also influenced by water temperature, and by variations in the flow of fresh water downstream. During this phase they also begin to go through a series of changes, becoming gradually more pigmented.

The glass eels tend to accumulate at the point in the estuary or river where STST no longer results in an overall upstream movement, and so above the tidally-influenced section of rivers, they begin active migration, swimming upstream and eventually reaching the smallest of watercourses, even crawling out of the water through wet grass and sand to reach unconnected ponds.

While in the glass eel phase, they are particularly vulnerable to fishing (as glass eels are eaten as a delicacy and taken for farming adult eels), predation by other species, impingement in water intakes, and to artificial barriers such as dams and weirs which prevent their access to the headwaters.


Once settled in fresh water, they complete their transformation into young eels, or elvers, although the word is confusingly also used to describe them in the glass eel phase. Over the next 10 - 15 years, they grow in to adults, known as yellow eels, for their golden-tinged colouration; in this time they reach up to 3 feet (1 metre) in length - exceptionally as much as 5 feet, or 1.5 metres. The female generally grows considerably larger than the male; any eel over about 50cm in length is likely to be a female. Eels kept in captivity have reputedly lived as long as 84 years, if old accounts are to be believed. 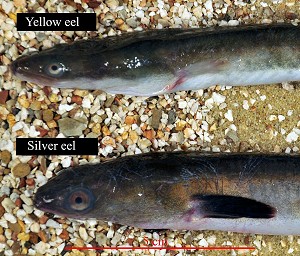 Comparison of the heads of a yellow and silver eel
Eventually, some individuals start to become sexually mature, and a number of other physiological changes take place. Their eyes become larger, and their eye pigments change to adapt to vision in deep ocean water; their head gets shorter and blunter, and their colour becomes more silvery - hence they are know in this phase as silver eels.

They begin to migrate downstream, again sometimes leaving the water to cross wet grasslands and reach rivers, and ultimately, the sea. Along this journey, their gut begins to atrophy, so during the sea-borne phase of their life they are entirely reliant on their body's reserves of stored energy.

Although many tracking experiments have been carried out, the oceanic stage of their journey, the precise location of their spawning grounds, and their spawning behaviour, remains a mystery.